That was over a month and a half ago!  Do you all still remember us?  Let me give you some reminders of who we are in case some of you forgot.  First we have Arwen, our Iron Fist Curtain Diva, who is still very much in charge of her pack.
Then we have Nyxie, our resident Chicken-Heart Guardian, loyal minion of Arwen:

And finally, we have Fenway, the Little Brother of the pack and resident snuggler, paper towel & sock connoisseur, and sister tormentor.  (other aliases include:  FennyFennyFooFoo, Runtabull, and T's favorite, Butt-holio):
So where have we been?  Where should I start...
After much practice, sore knees and sweaty hours on the treadmill and trails, I ran a 5K!!  I ran the 2012 Fort Worth Zoo Run with T, and 3 other friends at the end of April.  It was exciting, fulfilling, and a huge fitness milestone for me.  This was a hard-fought battle but I did it!  I was so very proud of T for running with me - she beat my time with only a few practice runs under her belt.  Ahh, the glory of youth!

May ushered in several evening events for the final days of T as a middle schooler.  I can hardly believe she's headed to high school.  Neither can she, really, so there were many hours of convincing, cajoling and promising that high school will not be a living horror show.  Not a word, folks.  Not one word!

We had a busy several weekends.  We attended the Texas Frightmare convention, where cast members of one of our favorite TV shows, The Walking Dead were in attendance to answer questions and be drooled over. (I did mention that Norman Reedus was there, right?)

Matt and I opened a second online store, Conversation Glass on Etsy.  We take glass bottles destined for landfills and create hand-cut, hand-sanded & polished glassware.  Sustainable goods, repurposed to make something beautiful.  It's a win-win situation.  And it's pretty fun to do, actually.  I hope you'll have a look at our glassware - we're pretty proud of it!!  Please follow us on Facebook (Conversation Glass) or Twitter (@ConvoGlass) and Pinterest (Conversation Glass).  There will be giveaways coming soon :)  Here are some samples:
Tall Wine Bottle Tumblers: 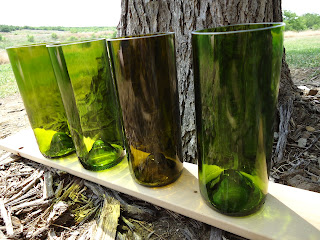 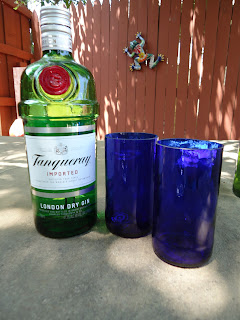 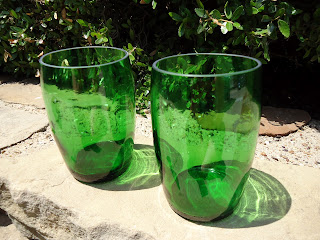 Finally, this past week brought us the last official week of school for T.  And her summer visit to her grandparents' house.  It's been quiet at home today.  And now that I can put up the stepmom hat for a short while, I can get back to blogging!

All of this has absolutely nothing to do with dogs, but they've been a part of everything we do and I just didn't feel right jumping back in to Blogville without letting you know why I've had no time to blog.  I've missed you all and can't wait to catch up!

The girls and I love to hear from you - please leave us a note!

Promote Your Page Too